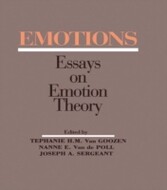 Based upon lectures presented at an invitational colloquium in honor of Nico Frijda, this collection of essays represents a brief and up-to-date overview of the field of emotions, their significance and how they function. For most, emotions are simply what we feel, giving our lives affective value. Scientists approach emotions differently -- some considering the ",feeling", aspect to be of little relevance to their research questions. Some investigators consider emotions from a phenomenological perspective, while others believe that the psychophysiological bases of the emotions are of prime importance, and still others observe and study animals in order to generate hypotheses about human emotions. Containing essays which represent each of these approaches, this book is in one sense a heterogenous collection. Nevertheless, the variety of approaches and interests come together, since these scholars are all operating from a more or less cognitive psychological orientation and use the same conceptual reference scheme. Written by experts in their own area, the essays reflect the richness of research in emotions. Whether these approaches and opinions can be harmonized into a single theory of emotions is a question which the future will have to answer.