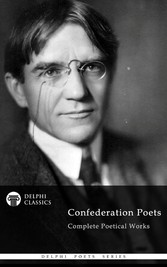 The Confederation Poets were a group of Canadian English-language poets of the late nineteenth century whose work expressed the national consciousness inspired by the Confederation of 1867. Their transcendental and romantic praise of the Canadian landscape would go on to dominate Canadian poetry until the twentieth century. They were also called the Maple Tree School due to how their verses portrayed a touching love for the Canadian landscape. The term 'Confederation Poets' was coined by the Canadian professor and literary critic Malcolm Ross, who singled out four poets: Charles G. D. Roberts (1860-1943); Bliss Carman (1861-1929); Archibald Lampman (1861-1899); and Duncan Campbell Scott (1862-1947). They composed poems in a classic form, often on themes of love or philosophical speculation against the backdrop of nature; and they all reacted to Canada's growing industrialisation, favouring a retreat to the as yet unspoiled wilderness. This comprehensive volume of the Delphi Poets Series presents the complete poetical works of the four principal members of the Confederation Poets, with numerous illustrations and the usual Delphi bonus material. (Version 1)

Please visit www.delphiclassics.com to browse through our range of poetry titles or buy the entire Delphi Poets Series as a Super Set