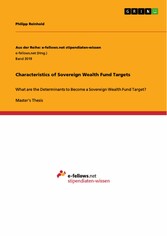 
Master's Thesis from the year 2018 in the subject Economics - Finance, grade: 1,3, Technical University of Munich (TUM School of Management), language: English, abstract: Sovereign Wealth Funds (SWFs) have reached an enormous financial power and have tripled their assets under management to 7.4 trillion American dollars during the past ten years. So far, academia has focused on the most obvious characteristic of SWFs, the state ownership, and relating governance issues. This thesis answers the question of whether there are certain company characteristics, which are preferred by SWFs when investing, and which characteristics influence the ex-post probability of becoming a SWF target. For this purpose, the selected sample is compared to a set of Year, Industry, Size, and MTBV matched peers. First, systematic differences between targets and peers are identified using t-test and Wilcoxon rank sum test statistics. Second, the influence of variables on the ex-post probability of becoming a SWF target is analyzed using logistic panel regression models. The regression results are further discussed using odds ratios and marginal effects analysis. The main finding is that target companies are typically significantly larger than their matched peers, and the size of a company is identified to have the highest influence on the likelihood of becoming a target. This is accompanied by the finding that a higher proportion of held cash has a positive influence, and a higher book leverage ratio has a negative influence. Additionally, it is shown that there are no target characteristics, which would promote large or small-scale investments. As introduction into further research, it is analyzed how stock markets react on announced SWF investments. It is shown that excess returns of approximately one percent can be observed within a three-day event window.