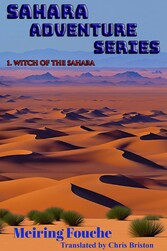 Witch of the Sahara

Witch of the Sahara

This is the first story in the Sahara Adventure series, in which you will meet, among others, Teuns Stegmann. A South African who joined the French Foreign Legion in the Sahara Desert, to avenge the death of his brother who was killed there.

The story begins when a Legionnaire is fortunate enough to survive an attack by the Arabs in the desert. He speaks of a white woman who apparently commanded the attack on the French patrol.

Colonel Le Clerq of Fort Dini Salam decides to immediately retaliate. He sends his faithful captain D'Arlan with two hundred men, including Teuns and his companions, to break the so-called 'white witch's' power in the Atlas Mountains before she has too much French blood on her hands.

Very soon, however, the column ends up in serious trouble. They are trapped by the Doelaks in the desert, without a drop of water to drink. And, as if this is not bad enough, they will later be forced to work in a radioactive Uranium mine with some of them being sent to the 'Hill of the Eagles'.

Will Teuns's experience together with D'Arlan's ingenuity, who is considered 'the Houdini of the desert,' be enough to save them from their predicament? Read the exciting story to find out for yourself.