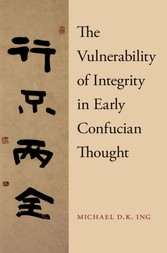 The Vulnerability of Integrity in Early Confucian Thought is about the necessity and value of vulnerability in human experience. In this book, Michael Ing brings early Chinese texts into dialogue with questions about the ways in which meaningful things are vulnerable to powers beyond our control, and more specifically how relationships with meaningful others might compel tragic actions. Vulnerability is often understood as an undesirable state, invulnerability is usually preferred. While recognizing the need to reduce vulnerability in some situations, The Vulnerability of Integrity demonstrates that vulnerability is pervasive in human experience, and enables values such as morality, trust, and maturity. Vulnerability is also the source of the need for care for oneself and for others. The possibility of tragic loss fosters compassion for others as we strive to care for each other. This book demonstrates the plurality of Confucian thought on this topic. The first two chapters describe traditional and contemporary arguments for the invulnerability of integrity in early Confucian thought. The remainder of the book focuses on neglected voices in the tradition, which argue that our concern for others can and should lead to us compromise our own integrity. In such cases, we are compelled to do something transgressive for the sake of others, and our integrity is jeopardized in the transgressive act.