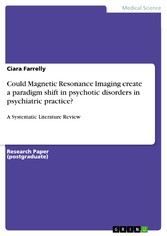 Research Paper (postgraduate) from the year 2019 in the subject Medicine - Diagnostics, grade: 80.0%, University of Portsmouth, language: English, abstract: This project aimed to ascertain whether Magnetic Resonance Imaging (MRI) could create a paradigm shift in psychiatric practice for psychotic disorders. Psychotic disorders are mental illnesses that are characterised by hallucinations and delusions, with disturbances to the thinking process, insight, and judgement of the individual. A prompt and accurate diagnosis for psychoses is critical for effective patient management, treatment and subsequently, patient outcomes. Unlike most diseases, there are presently no reliable biomarkers that offer a definitive diagnosis for psychoses. The current symptom-based approach and is hindering the effectiveness of diagnosis due to validity and reliability issues. As psychoses are classified based upon clinical presentation, the diagnosis between brain disease, trauma and different psychotic disorders become blurred. Research from this project has suggested the potential use of structural and functional MRI techniques in determining a biomarker to overcome these issues. Psychoses are classified as either organic or functional. Organic psychoses are characterised by brain abnormalities that are induced by physical defects including brain trauma or illnesses, such as Alzheimer's disease. Substance abuse can also generate psychosis. However, brain function that precipitates delusions and hallucinations are more frequently associated with specific psychiatric disorders, categorised as functional psychoses which incorporates schizophrenia and mood disorders, such as Bipolar Disorder (BD). The World Health Organisation (WHO) (2001) acknowledged schizophrenia as the most common of the psychoses, affecting 21 million people worldwide.

I am a recent graduate with a First Class Honors (1:1) degree in BSc (Hons) Diagnostic Radiography.