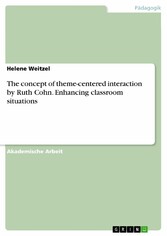 Akademische Arbeit aus dem Jahr 2015 im Fachbereich Didaktik - Allgemeine Didaktik, Erziehungsziele, Methoden, Note: 1,5, Pädagogische Hochschule Heidelberg (Englisch), Veranstaltung: Expository and Research Writing, Sprache: Deutsch, Abstract: How does Theme-Centered Interaction enhance classroom situations? How does it prevent disturbances and rivalry, and can it effectively cope with diversity? Moreover, how far does it provide honest feedback and learner autonomy? Theme-Centered Interaction (TCI) is a concept by Ruth C. Cohn to enhance teamwork and interactions that take place within groups. Furthermore, TCI is a stance that encourages an appreciative cooperation among people and supports 'living learning'. Thus, TCI is considered to be an ideal model to lead and accompany groups in order to improve the process of learning. Consequently, TCI is used especially when working with groups and teams and when teaching in schools, institutions of higher education and adult education, but also in counselling and coaching. Theme-Centered Interaction has a holistic view on mankind and focuses on the individual person. Different opinions and lifestyles are respected and thus create an esteeming atmosphere, in which each individual is considered to be important and is supported in his development according to his abilities and wishes. Four factors might influence the interaction within groups: the individual, the group interaction, the theme and the globe. To have a group work successfully on one task, a dynamic balance of these four factors must be achieved. Disturbances, however, must be regarded to ensure this equilibrium and thus enhance 'living learning'. Because of its notions, the TCI-concept is an ideal model to be used in education.