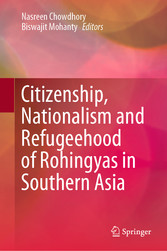 Citizenship, Nationalism and Refugeehood of Rohingyas in Southern Asia

Citizenship, Nationalism and Refugeehood of Rohingyas in Southern Asia

This book provides an in-depth investigation of citizenship and nationalism in connection with the Rohingya community. It analyses the processes of production of statelessness in South Asia in general, and with regard to the Rohingyas in particular. Following the persecution of the Rohingya community in Myanmar (Burma) by the military and the Buddhist militia, a host of texts, mostly descriptive, have examined the historical, political and cultural roots of the genocidal massacre and the flight of its victims to South Asia and South-East Asian countries. The UNHCR reports describe the plight of Rohingyas during and after their journey, while other works focus on the political-economic roots of this ethnic conflict and its consequences for the Rohingyas. To date, very few theoretical insights have been provided on the Rohingya issue.
This book seeks to fill that gap, and explores a dialogue between the state and its citizens and non-citizens that results in the production of statelessness. In theoretical terms, the book addresses the construction of citizens and non-citizens on the part of the state, and the process of symbolic othering, achieved through various state practices couched in terms of nationalism. Extensive case studies from India, Myanmar and Bangladesh provide the foundation for a robust theoretical argument.
Given its scope, the book will be of interest to students, academics and researchers with a focus on political economy in South Asia in general and/or refugee studies in particular.

Nasreen Chowdhory is an Assistant Professor at the Department of Political Science, University of Delhi. She received her Ph.D. in Political Science from McGill University. Some of her prominent works are 'Refugees, Citizenship and Belonging in South Asia: Contested Terrains' (Springer 2018) and 'Deterritorialised Identities and Transborder Movement in South Asia' (Springer 2019).
Biswajit Mohanty is an Associate Professor at the Department of Political Science of Deshbandhu College, University of Delhi. As a member of the CSDS-Lokniti network, he has contributed articles in journals like the Economic and Political Weekly, as well as numerous book chapters. His current research focus is on border and migration studies.