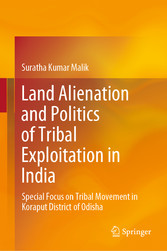 This book explores tribal land alienation problems in India and tribal agitation against land encroachment and alienation. It discusses India's tribal land problem and explains how despite legislation to protect tribal lands, the problem has not been resolved since neither the letter nor the spirit of the law has been implemented. Due to continuous land encroachment and alienation by outsiders, the negligence of the revenue administration and the apathy of the central and state government, the situation concerning tribal land in the country have became precarious.
In this context, the book highlights the process of land estrangement among the tribes and the related movements, focusing on the Narayanpatna land movement in the Koraput district of Odisha. It argues that land remains a central issue that is extremely important for tribes as it directly affects their life, livelihood, freedom and development, and that the cultural attachment of tribes and their views regarding the idea of 'place' (land) furnishes crucial perspectives in understanding the politics of collective resistance. It also discusses the politicization of group identity and material interest against the outside authority as the basis of the unrest among the tribes, and when the grudges of the people are hardened due to insensitivity and tyranny, the extent of tribal resistance escalates, leading to conflict between the state and its own people. Given its scope, this book is a valuable resource for students and research scholars, as well as for policymakers and anyone interested in Indian democracy and development in general, and tribal problems, issues and politics in particular.

Suratha Kumar Malik has been an Assistant Professor at the Department of Political Science, Vidyasagar University, West Bengal, since 2012. He completed his postgraduate studies at the Centre for Political Studies, Jawaharlal Nehru University (JNU), New Delhi, and holds a Ph.D. from Vidyasagar University. He was awarded a Nirman Foundation Fellowship (Lord Bhikhu Parekh endowment) during his M.A. and was also awarded UGC-NET and junior research fellowships (JRF) during his M.Phil. at JNU. His research interests include dalit and tribal issues and politics, social-political movements, marginalization and identity politics, and Indian political thought and philosophy. He has published three books and more than a dozen research articles in respected national and international journals as well as chapters in various edited books including Sage, Springer etc.He has presented papers at over thirty-five international and national seminars/conferences across the country and abroad, including at Imperial College London, and in Dubai and Malaysia. He was the Principal Investigator (PI) in a recent major research project sponsored by the University Grants Commission (New Delhi). As the Principal Investigator (PI), he has completed the UGC Major Research Project recently. He was awarded 'Swami Vivekananda Excellence Award' by Seva Parishad, Kolkata (affiliated to NYKS, Ministry of Sports and Youth Affairs, Government of India in 2019. He is also the Programme Officer (PO), National Service Scheme, Vidyasagar University, West Bengal.