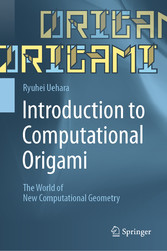 This book focuses on origami from the point of view of computer science. Ranging from basic theorems to the latest research results, the book introduces the considerably new and fertile research field of computational origami as computer science. Part I introduces basic knowledge of the geometry of development, also called a net, of a solid. Part II further details the topic of nets. In the science of nets, there are numerous unresolved issues, and mathematical characterization and the development of efficient algorithms by computer are closely connected with each other. Part III discusses folding models and their computational complexity. When a folding model is fixed, to find efficient ways of folding is to propose efficient algorithms. If this is difficult, it is intractable in terms of computational complexity. This is, precisely, an area for computer science research. Part IV presents some of the latest research topics as advanced problems. Commentaries on all exercises included in the last chapter.
The contents are organized in a self-contained way, and no previous knowledge is required. This book is suitable for undergraduate, graduate, and even high school students, as well as researchers and engineers interested in origami.


Ryuhei Uehara is a professor in the School of Information Science at the Japan Advanced Institute of Science and Technology. After working as a researcher at Canon Inc., he joined Tokyo Woman's Christian University as an assistant professor. He was later a lecturer and associate professor at Komazawa University. He was a visiting scholar at the University of Waterloo (Canada), the Massachusetts Institute of Technology (USA), Simon Fraser University (Canada), Université libre de Bruxelles (Belgium), ETH  Zürich (Switzerland), and Universitat Politècnica de Catalunya (Spain).  His research interests include computational complexity, algorithms and data structures, and graph algorithms. He is especially engrossed in computational origami, games, and puzzles from the point of view of theoretical computer science. He is one of two translators of the New Martin Gardner Mathematical Library into Japanese.