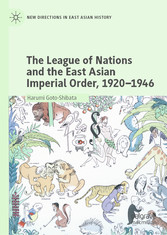 Well-grounded on abundant Japanese language sources which have been underused, this book uncovers the League of Nations' works in East Asia in the inter-war period. By researching the field of social and other technical issues, namely, the trade in narcotics, the trafficking of women and the work in terms of improving health provision and providing economic advice to Nationalist China, it not only examines their long-term impacts on the international relations in the region but also argues that the League's works challenged the existing imperial order of East and Southeast Asia. The book offers a key read for academics and students of international history and international relations, and others studying Japan or East Asia in the twentieth century.


Harumi Goto-Shibata is Professor of International History at the Department of Advanced Social and International Studies, Graduate School of Arts and Sciences, University of Tokyo, Japan. Her prior publications include Japan and Britain in Shanghai, 1925-31 (Macmillan, St Antony's series, 1995) as well as three single-authored books, and two co-edited books in Japanese.