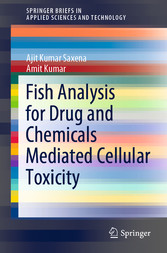 This book offers a comprehensive overview of drug and chemical cellular toxicity, especially concerning the effects of anticancer drugs (cyclophosphamide, methotrexate and phosphamidon) on chromosomes and proteins. It covers histological changes in rat testis during pre- and postnatal exposure to varied drug doses, along with laboratory findings on arsenic exposure and alcohol consumption producing neurological changes and deleterious effects on reproductive health in animals.
The book offers essential information on the role of anticancer drug- / chemical-mediated toxicity in connection with genetic changes in the brain and reproductive health, making it a valuable guide for researchers working in the areas of cancer research, infertility, molecular diagnostics and modern drug discovery, at biochemical and toxicity laboratories, and in genetic predisposition and molecular biology in general.

Prof. Ajit K. Saxena has received his Ph.D. in Genetics from Institute of Medical Sciences, B.H.U. in the year of 1990. During his Ph.D. he studied how anticancer drugs cause interference with normal development of the foetus and with special reference to the cause of abnormality during differentiation of male gonads which lead infertility including congenital anomalies. After receiving his Ph.D. degree he joined NIH funded Indo US project at AIIMS New Delhi; where he identified the role of novel antigen IL6 as a signal traducing agent in human glioblastoma. He also worked in various renowned Institutions of India and abroad including C.C.M.B., C.D.R.I., A.M.C., B.P.K.I.H.S. (Dharan) and B.H.U. Currently, he is working as a Professor of Clinical Genetics & Head in the Department of Pathology & Laboratory Medicine in All India Institute of Medical Sciences, Patna. He has successfully completed his administrative responsibilities as Head of the Department in prestigious institutions of India & abroad. In addition he has also served his duties as a Scientific Advisor to the Government. His research interest includes study of Gene Polymorphism in Congenital Neural Tube Defects/ Tumor Biology/Infertility and Cytokines gene expression in chronic wounds and hypertrophic scars. Currently, his research interest includes role of stem cells in translational research. Of note, he has published more than 100 articles in journals of international reputes with high citations. Based on his research and fellowship training, he has received several awards and honours, such as Gold Medal Award, Confer 'Vivek Ratan Award' and Millennium Award. Besides his research, teaching and administration he has also guided more than 36 students. He is serving as an editorial member of reputed journals like Biomedical Research, International Journal of Infertility. He has also served as a reviewer for several government funded project. He also acquired and completed several Government funded research projects from a variety of funding agencies like ICMR, DBT, CSIR and National Medical Research Council. He is also a 'fellow' and 'member' of various scientific organizations, National Academy of Sciences, USA, National Academy for advancement of science and technology (USA), member of National Academy of Medical Sciences, India. He is also a Fellow of Indian Association of Biomedical Scientist, Chennai, Fellow of Indian Association of Applied Biotechnology, Mysore. Currently he is engaged in the developing 'clinical genetics' for diagnostic and research in the place like Bihar and adjoining newly established states like Jharkhand and Chhattisgarh. He is also interested to develop 'Centre for stem cell research and therapeutics' (CSCRT) with the aim to provide the best medical care for the management of multifactorial disorders such as NTD's.
Dr Amit Kumar is a DNA Forensics Professional, Entrepreneur, Engineer, Bioinformatician and an IEEE Volunteer. In 2005 he founded first Private DNA Testing Company Bio Axis DNA Research Centre (P) Ltd in Hyderabad, India with an US Collaborator. He has vast experience of training 1000+ Crime investigation officers and helped 750+ Criminal and non-criminal cases to reach justice by offering analytical services in his laboratory. His group also works extensively on Genetic Predisposition risk studies of cancers and has been helping many cancer patients from 2012 to fight and win the battle against cancer. Amit was member of IEEE Strategy Development and Environmental Assessment committee (SDEA) of IEEEMGA. He is senior member of IEEE and has been a very active IEEE Volunteer at Section, Council, Region, Technical Societies of Computational Intelligence and Engineering in Medicine and Biology and at IEEE MGA levels in several capacities. He has driven number of IEEE Conferences, Conference leadership programs, Entrepreneurship development workshops, Innovation and Internship related events. Currently He is a Professor at SJB Institute of Technology Bangalore, IEEE MGA Nominations and Appointments committee member and Chairman of IEEE Hyderabad Section.