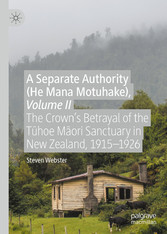 A Separate Authority (He Mana Motuhake), Volume II - The Crown's Betrayal of the T?hoe M?ori Sanctuary in New Zealand, 1915-1926

A Separate Authority (He Mana Motuhake), Volume II - The Crown's Betrayal of the T?hoe M?ori Sanctuary in New Zealand, 1915-1926

Following on from Volume I on the formation of the Urewera District Native Reserve, this monograph examines the period from 1908 to 1926, during which time the Crown subverted T?hoe control of the UDNR, established a mere decade earlier. While Volume I described how the T?hoe were able to deploy kin-based power to manipulate Crown power as well as confront one another, this volume describes ways in which the same ancestral descent groups closed ranks to survive nearly two decades of predatory Crown policies determined to dismantle their sanctuary. A relentless Crown campaign to purchase individual T?hoe land shares ultimately resulted in a misleading Crown scheme to consolidate and relocate T?hoe  land shares, thereby freeing up land for the settlement of non- T?hoe  farmers. By the 1950s, over 200 small T?hoe blocks were scattered throughout one of the largest National Parks in New Zealand. Although greatly weakened by these policies in terms of kinship solidarity as well as land and other resources, T?hoe resistance continued until the return of the entire park in 2014-with unreserved apologies and promises of future support.

In both volumes of A Separate Authority (He Mana  Motuhake), Webster takes the stance of an ethnohistorian: he not only examines the various ways control over the Urewera District Native Reserve (UDNR) was negotiated, subverted or betrayed, and renegotiated during this time period, but also focuses on the role of M?ori hap?, ancestral descent groups and their leaders, including the political economic influence of extensive marriage alliances between them. The ethnohistorical approach developed here may be useful to other studies of governance, indigenous resistance, and reform, whether in New Zealand or elsewhere.


Steven Webster, PhD, is Honorary Research Fellow at the University of Auckland, New Zealand, where he taught Social Anthropology and M?ori Studies before his retirement. Since the 1980s, he has been closely involved in issues of M?ori land, M?ori history, ethnic politics, and political economy in New Zealand.