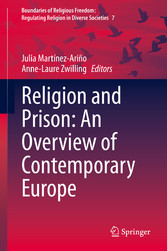 Religion and Prison: An Overview of Contemporary Europe

Religion and Prison: An Overview of Contemporary Europe

This volume offers a European overview of the management of religious diversity in prisons and provides readers with rich empirical material and a comparative perspective.
The chapters combine both legal and sociological approaches. Coverage for each country includes historical background, current penitentiary organization, and recent changes or trends. In their exploration of legal aspects, the contributors look at such factors as the status of prison chaplains and regulations concerning religious practice and religious freedom. These include meals, prayers, and visits. The sociological analysis examines religious discrimination in prison, church-prison relations, conversion and proselytism, and more.
The European coverage includes countries for which such information is seldom available. The book offers readers a better understanding of governance of religion in prisons. This text appeals to students, researchers and professionals in the field.

Julia Martínez-Ariño is Assistant Professor of Sociology of Religion at the University of Groningen (Netherlands). She received her PhD in Sociology from the Autonomous University of Barcelona (Spain). She has worked as research fellow at the Max Planck Institute for the Study of Religious and Ethnic Diversity (Göttingen, Germany) and as postdoctoral researcher at the Université de Montréal (Canada). Her main research interests are the governance of religious diversity in public institutions, in particular in prisons, hospitals and schools, and cities. She has conducted fieldwork in Spain, Canada, Germany and France.
Anne-Laure Zwilling is a research fellow at the joint research unit Droit, Religion, Entreprise, Société of the University of Strasbourg and the French National Scientific Research Centre (CNRS), where she is the director of several international research projects. She holds MA degrees in philosophy and religious studies, a PhD in religious sciences and a habilitation in religious anthropology. Her fields of interest are religious minorities in France and Europe, and religious founding texts.