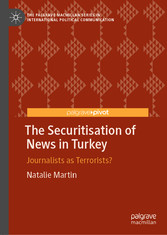 The Securitisation of News in Turkey - Journalists as Terrorists?

The Securitisation of News in Turkey - Journalists as Terrorists?

This book examines why Turkey has become infamous as a repressor of news media freedom. For the past decade or so it has stood alongside China as a notorious jailer of journalists - at the same time as being a candidate state of the EU. The author argues that the reasons for this conundrum are complex and whilst the AKP is responsible for the most recent illiberality, its actions should be taken in the wider context of Turkish politics - and the three way battle for power which has been raging between Kemalists, Kurds and Islamists since the republic was founded in 1923.  The AKP are the current winners of this tripartite power struggle and the securitisation of journalists as terrorists is part of that quest. Moreover, whilst securitisation is not new, it has intensified recently as the number of the AKP's political opponents has proliferated. Securitisation is also a means of delegitimising journalism - and neutralizing any threat to the AKP's electoral prospects - whilst maintaining a democratic façade on the world stage. Lastly, the book argues that whilst the AKP's securitisation of news began as a means of quashing the reporting of illiberality against wider political targets, since 2016 it has become a target in its own right. In the battle for power in Turkey, journalism is now one of the many losers.

Natalie Martin was a BBC journalist who went back to academia in 2007 to do a PhD at Loughborough University on the Turkey-EU accession process 1999-2004. She is now Assistant Professor in the Department of Politics and International Relations at the University of Nottingham, UK, and has published widely on issues surrounding Turkey and the EU.