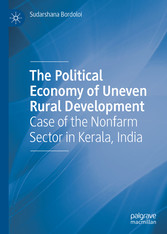 The Political Economy of Uneven Rural Development - Case of the Nonfarm Sector in Kerala, India

The Political Economy of Uneven Rural Development - Case of the Nonfarm Sector in Kerala, India

The book shows how class relations develop and is a consequence of capitalist development of the rural non-agricultural/non-farm sector (RNFS)---seen as the dialectical relation between the forces and relations of production---as mediated by the state, which produces uneven social and spatial outcomes. Central to the framework for this book are four inter-related conceptual building blocks or themes: social relations of production, productive forces, role of the state and concrete development outcomes of capitalist production in RNFS in the context of class and non-class relations of oppressions. These four conceptual themes follow a logical sequence where each concept evolve in specific contexts within the RNFS; while connected to each other in a dialectical manner; and come together to form the central argument of the book.