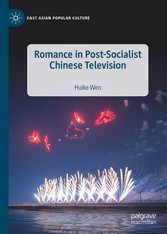 This book is about how the representations of romantic love in television reflect the change and the dilemma of the dominant values in post-socialist Chinese mainstream culture. These values mainly center on the impact of individualism, consumerism, capitalism, and neoliberalism, often referred to as western culture, on the perception of romantic love and self-realization in China.
The book focuses on how romantic love, which plays a vital role in China's ideologically highly restricted social environment by empowering people with individual choice, change, and social mobility, must struggle and compromise with the reality, specifically the values and problems emerging in a transitional China. The book also examines how the representation of romantic love celebrates ideals-individual freedom, passion, and gender equality-and promises changes based on individual diligence and talent while simultaneously obstructing the fulfillment of these ideals.

Huike Wen is Associate Professor of Chinese at Willamette University, Oregon, USA. She has focused on studying romantic relationship, marriage, and intimacy on Chinese television in recent years. Her research focuses on gender in Asian media.
She is the author of Television and the Modernization Ideal in 1980s China (2013). She has also published in English in ASIA Network Exchange: A Journal for Asian Studies in the Liberal Arts, Camera Obscura: Feminism, Culture and Media Studies, Journal of Communication Inquiry, and in Chinese in various Chinese academic journals, such as Journal of Sichuan University, Journal of Southwest University for Nationalities, and Light Vehicles. She has authored the 'Auto Forum' discussing auto culture for Sohu.com, one of the two largest Chinese internet portals. She has also contributed to Chinese Reading World, an online reading practice system designed for Chinese learners.