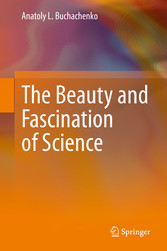 The Beauty and Fascination of Science

The Beauty and Fascination of Science

In this book, Professor Anatoly Buchachenko gives a brief and informative description of the most striking achievements and discoveries made in the major natural sciences at the turn of the century - in the late twentieth and early twenty-first centuries. The author has a rare ability to describe scientific discoveries so that these achievements and their significance are understandable not only by professionals and scientists of all specialities, but for any reader interested in modern science, its role in the existence of mankind, and its impact on human society.
Originally published in Russian, Professor Buchachenko's book describes the interaction of natural sciences with social ones-philosophy and history-as well as the part played by the human factor in the development of science, especially the role of the great scientists.

Anatoly Buchachenko is currently Professor of Chemistry in the Institute of Chemical Physics of the Russian Academy of Sciences and Professor of Chemistry at the Faculty of Chemistry of Moscow State University. He received his MS degree from Gorky (Nizhny Novgorod) University (1958) and his Ph. D. from the N.N.Semenov Institute of Chemical Physics in Moscow. He was a postgraduate student, Assistant Professor, Full Professor and Director of Institute of Chemical Physics (1994-1996).
His scientific interests lie in the chemistry and physics of stable radicals and high spin molecules, ESR spectroscopy, NMR spectroscopy of paramagnetics, spin chemistry, organic (molecular) ferromagnets. Buchachenko is one of the founders and leaders of spin chemistry. He discovered magnetic isotope effect, a new remarkable phenomenon of fundamental importance for chemistry, geochemistry, physics and biology. He observed microwave emission generated by chemical reactions (chemical maser, 1978) and formulated principles of chemical radiophysics. He is also the author of the radio induced magnetic isotope effect and spin catalysis. He has contributed new ideas in design and synthesis of molecular ferromagnets.
Anatoly Buchachenko is a Full Member of the Russian Academy of Sciences. He was awarded the State Prize of the FSU for science (1977); the Lenin Prize, the highest Award for science in the FSU (1986); the Voevodsky Award (1997); National Prize for Education Activity (2002) and National Prize Triumph for the highest achievements in science (2008).
His scientific family includes more than 50 post-doctoral fellows, post-graduate students and visiting associates. He was a member of the Advisory Board in Chemical Physics Letters, Journal of Physical Chemistry, Russian Chemical Reviews, Editor-in-Chief of Russian Journal of Physical Chemistry, Focus on Physics and has authored more than 700 books and papers.