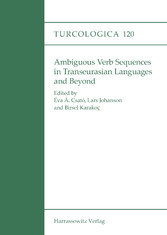 Ambiguous Verb Sequences in Transeurasian Languages and Beyond

Ambiguous Verb Sequences in Transeurasian Languages and Beyond

Some sequences of verbs can display systematic ambiguities in meaning. Accent patterns are among the means for disambiguating them. The study based on presentations given at the 19th International Conference on Turkish Linguistics (ICTL), held August 17-19, 2018, at Nazarbayev University, Astana, Kazakhstan, which was the first conference of this kind in Central Asia presents a comprehensive analysis of ambiguous verb sequences and ways of teasing them apart, an issue that has never before been addressed in the typological literature. It consists of seventeen contributions focusing on data from the Transeurasian languages Turkic, Japanese and Korean, and a Tungusic variety. The studies demonstrate strong typological similarities between these languages. The introductory chapter succinctly presents Lars Johanson's theoretical framework and terminology, which are applied by the authors. Alexandra Y. Aikhenvald reviews verb sequences from a broad typological perspective. Martine Robbeets studies the coincidence of intraterminal and postterminal readings in certain converb constructions across the Transeurasian languages. Ten papers deal with Turkic varieties such as Turkish dialects, a Volga-Turkic variety of the 17th century, Kazakh, Yakut, Dolgan, Siberian Turkic, Noghay, Salar, and Uyghur. Complex predicates are analyzed in an endangered Tungusic variety, Uilta (Orok). One chapter deals with Korean, and another with Fukuoka Japanese. The final contribution, on Ladakhi (a Tibetic language), demonstrates the broader areal distribution of ambiguous verb sequences.