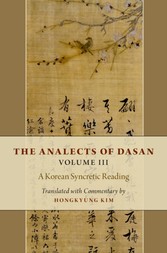 With extensive research and creative interpretations, Dasan's Noneo gogeum ju (Old and New Commentaries of the Analects) has been evaluated in Korean Studies as a crystallization of his studies on the Confucian classics. Dasan (Jeong Yak-yong: 1762-1836) attempted to synthesize and overcome the lengthy scholarly tradition of the classical studies of the Analects, leading it not only to become one of the greatest achievements of Korean Confucianism but also to demonstrate an innovative prospect for the progress of Confucian philosophy. Through this, he has positioned it as one of the ground-breaking works in all Confucian legacies in East Asia. Originally consisting of forty volumes in traditional bookbinding, his Noneo gogeum ju contains one hundred and seventy-five new interpretations on the Analects, hundreds of arguments about the neo-Confucian commentaries of the Analects commentaries, hundreds of references to the scholarly works of the Analects, thousands of supportive quotations from various East Asian classics for the author's arguments, and hundreds of philological discussions. This book is the third volume of an English translation of Noneo gogeum ju with the translator's comments on the innovative ideas and interpretations of Dasan on the Analects.