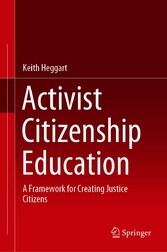 This book explores alternative models of civics and citizenship education. Specifically, it uses Justice Citizens, a participatory research and film-making project, as a tool to examine young people's ideas about active citizenship and participation in public spaces. It introduces a framework that seeks to explore the diverse and apparently contradictory nature of young people's active citizenship. The framework draws on complexity theory combined with critical pedagogy and democratic education to formulate an approach to developing active citizenship among young people. This approach extends theories of both critical pedagogy and education for citizenship, and by doing so seeks to explain the variegated nature of young people's engagement with civil society.
This book contains a valuable repository of ideas and resources for application for teachers to use in schools and classrooms. Academics engaged in initial teacher education, at both primary and secondary levels, will find the framework of use when describing the importance and new approaches to civics and citizenship education within the current school and policy environments.

Keith Heggart is a former high school teacher and an educational leader who worked for more than fifteen years in public, Catholic and independent schools in Australia and the UK. He is Google Certified Innovator, Apple Distinguished Educator and Fellow of the Royal Society for the encouragement of Arts, Manufactures and Commerce.
Keith has a long involvement with the trade union movement in education. He has designed learning materials for the Independent Education Union NSW/ACT as well as working in digital organizing. Keith recently completed his Ph.D. exploring justice-oriented citizenship education among Australian school students. He currently works as an academic at the University of Technology Sydney, Australia, in the initial teacher education program.