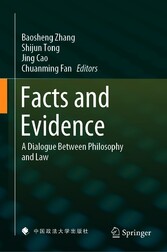 Facts and Evidence - A Dialogue Between Philosophy and Law

Facts and Evidence - A Dialogue Between Philosophy and Law


This book presents an in-depth discussion on two concepts from the field of philosophy and law, in order to improve our understanding of the relation between 'fact' and 'evidence' in judicial process. Since fact-finding is a difficult task for judges, proof by evidence has been devised to help them access the truth. However, in the process of judicial fact-finding, there is always a gap between fact and truth. This book covers a wide range of topics, from reflections on the concept of 'fact,' 'evidence' and 'fact-finding' in the field of philosophy and law to individual case studies. As such it is a useful reference resource on the continuing research on the judicial proof process for students and scholars.

Baosheng Zhang is a Professor of Law in China University of Political Science and Law (CUPL). He is also the Co-Chair of China Cooperative Innovation Center of Judicial Civilization. Professor Zhang's main research areas include evidence and jurisprudence. He is the author of more than 60 scholarly articles and book chapters published both in Chinese and English. Professor Zhang is also frequently invited to give speech at conferences throughout China, the USA and Europe. In 2006, Professor Zhang received the Ministry of Education Humanities and Social Science Achievement Award (second prize).
Shijun Tong is Professor of Philosophy and Chairman of the University Council of East China Normal University (ECNU). He became the Chancellor of NYU Shanghai on June 1, 2020. Tong got his B.A. and M.A. degrees from ECNU, respectively, in 1982 and 1984, and his Ph.D. degree from the University of Bergen of Norway in 1994. Specialized in epistemology and political philosophy, Tong has published more than 10 books and more than 100 papers in Chinese and other languages, as well as more than 10 Chinese translations from English or German.
Jing Cao is a Lecturer in Law of China University of Political Science and Law. Her research areas include evidence and criminal law.
Chuanming Fan is an Associate Professor at East China Normal University School of Law. His research areas include evidence law, procedure law and judicial system.