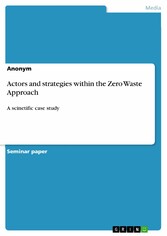 Seminar paper from the year 2011 in the subject Communications - Public Relations, Advertising, Marketing, Social Media, grade: 1,7, Queen Margaret University, language: English, abstract: A scientific case study in actors and strategies that were used during a referendum of the Zero Waste Approach in Scotland. The main focus is on the political communication of the new rule. The Zero Waste Plan is an important issue due to its origins in the Climate Change Act (2009) and to the pressure of adapting to stricter EU waste policies. The issue was put on the public agenda in 2007 for the first time and even now in 2011, it is causing a public debate on a national level. The reason for the importance of the Zero Waste Plan lies in its objectives and in its consequences for businesses, industries, public sector and citizens.