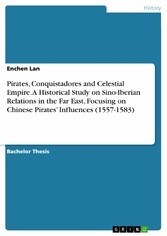 Pirates, Conquistadores and Celestial Empire. A Historical Study on Sino-Iberian Relations in the Far East, Focusing on Chinese Pirates' Influences (1557-1583)

Pirates, Conquistadores and Celestial Empire. A Historical Study on Sino-Iberian Relations in the Far East, Focusing on Chinese Pirates' Influences (1557-1583)

Bachelor Thesis from the year 2020 in the subject History - Asia, grade: A, University of Nottingham, language: English, abstract: The innovation of this dissertation is that 'Chinese pirates' and 'Sino-Iberian relations' are two elements that have been, to some extent neglected in previous studies, and their connection is studied in this dissertation. History about Chinese pirates in the Ming Dynasty is often regarded as a part of domestic history in China. In past research, Chinese Pirates lacked a kind of international connection, while scholars paid more attention to the so-called 'Japanese pirates,' whose international elements have been widely recognized. Generally, the Sino-Portuguese and Sino-Spanish relations are studied separately. However, it is not conducive to understanding the Chinese attitude toward these two Catholic and Romance-languages-speaking nations from the same peninsula during the Ming Dynasty because they were collectively referred to as 'Fo Lang Ji' by the Ming Chinese. In this case, this term can be regarded as the Chinese counterpart to 'Iberians' in English during the Ming Dynasty. Hence, one nation's behaviour in the greater Iberian community would affect the Chinese attitude towards the other Iberian nation. This character is shown in the dissertation. This dissertation's core question is: How did pirate groups led by Chinese heads influence the relations between the Iberian communities in the Far East and the Chinese Ming Dynasty from 1557 to 1583? It divides into three minor questions according to the three stages of communication between the Chinese and Iberians: Firstly, what is the relation between 'piracy' defined by Ming central government and early Sino-Iberian military conflicts? Secondly, to enter China and stabilize its position in China, how would Iberians cooperate with the Chinese government by solving pirate-related problems? Finally, why Portuguese Macao and Spanish Manila had different results in diplomatic activities in China? Following the introductory chapter, each of the three chapters answers these minor questions step by step, and finally, demonstrates how Chinese pirates affect Sino-Iberian relations in the Far East.

Enchen Lan is a writer and analyst of politics and international relations with a primary focus on East Asia. He has an M.A. and B.A. in political science and history from the University of Nottingham, with a one-year (2018-2019) exchange experience at the University of Deusto, Spain, where he focused on Basque radical nationalism and ETA. His research areas mainly include politics and history of Asia, nationalism, mass-media, cybersecurity, and foreign policy. He is also interested in anthropology and linguistics. In 2019, he worked for the Chinese Institute of Social Science Survey, Peking University, had field research in the China-Myanmar boundary in the northwest of Yunnan province.