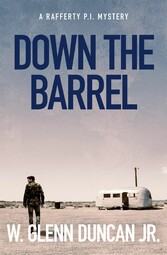 Down The Barrel - A Rafferty P.I. Mystery

Down The Barrel - A Rafferty P.I. Mystery

Look down the barrel. Breathe out. Relax.

London Baines has it all.

His 'real-life' TV show. All the money he'll ever need-thanks to his wealthy father, Herbert.

And someone hiding in the wings who'd rather see him as a corpse.

In the beginning, Herbert's fears for his son's safety seem like parental overreaction.

But Rafferty witnesses a visceral new threat to the heart of the Baines family and realizes the only chance at keeping London alive is to take him out of view.

And when London disappears from right under Rafferty's nose, a happy ending seems farther away than ever.

Can Rafferty flip the script, bring London home, and reunite father and son?

Or will the bad actors succeed in canceling London's run-permanently?

DOWN THE BARREL is the ninth book in the Shamus Award-winning Rafferty P.I. series from author W. Glenn Duncan Jr.

If you're a fan of Spenser, Reacher, or Elvis Cole, this series is a must-read.

Buy DOWN THE BARREL today!

'If you like Parker's Spenser, or Robert Crais' Elvis Cole you should love the Rafferty series.' - Mark A. Johnson.

'Rafferty is the best hardboiled PI of this era.' - Wendy Green.

'Any fan of Micky Spillane, the Jack Reacher novels, or Mark Yost's Rick Crane novels should absolutely venture into the world of Rafferty P.I.' - Michael Raabe.

'Duncan truly captured the pure essence of the definitive smart-ass private eye in his character Rafferty. Take part Sam Spade with a little Mike Hammer, mix in some Spenser and you have an awesome character.' - Cliff Fausset.

'This author goes on my list of great private eye writers along with Kinky Friedman, Elmore Leonard, and Lawrence Sanders.' - Tricia Schiro.