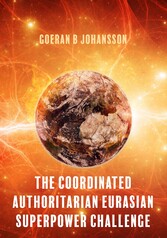 The Quadrology contains all separate parts of four books. These are Vladimir Putin, A Geostrategic Russian Icon, published in 2012. Vladimir Putin A geostrategic Russian Icon In the shadow of Ukraine, published in 2014. A Slavic People A Russian Superpower A Charismatic World Leader, published in 2016, and Alea Iacta Est The Die is Cast In the Shadow of Covid 19 Pandemic, released in 2020.
The Quadrology covers the entire dramatic global strategic development since the Kosovo war in 1999, Russia and China's cooperation within the BRICS(Brazil, Russia, India, China, South Africa and SCO (Shanghai Cooperation Organization) via the Ukraine crisis 2014, Syria, developments, The South China Sea challenge, the US presidential election in 2016 and 2020, and its implications for the United States' global leadership. The military development in general. Part four includes a historical-scientific look back at the geostrategic theories behind the United States' world domination ambitions, the Anglo-American geostrategists Harold Mackinder. Alfred Thayer Mahan, Nicholas Spykman, and the challenger of the same, the Russian geostrategist and ideologue behind the Fourth Political Theory, Alexander Dugin. The author's final analysis includes the latest dramatic development around the US epic chaos-influenced retreat from Afghanistan. The author predicted today's development already ten to fifteen years ago, as this trilogy shows. Plenty of source lists and illustrations.

Goeran B Johansson. Retired Teacher in Music , Swedish language and IT-support-technician. Author.Former member of the Swedish Social Democratic Party as EU and International representative.Independent Geostrategic Analyst focusing on the return of Russia as a World Super Power within the BRICS and SCO organizations.