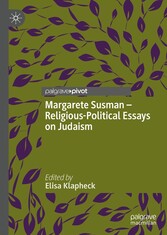 Margarete Susman was among the great Jewish women philosophers of the twentieth century, and largely unknown to many today. This book presents, for the first time in English, six of her important essays along with an introduction about her life and work. Carefully selected and edited by Elisa Klapheck, these essays give the English-speaking reader a taste of Susman's religious-political mode of thought, her originality, and her importance as Jewish thinker. Susman's writing on exile, return, and the revolutionary impact of Judaism on humanity, illuminate enhance our understanding of other Jewish philosophers of her time: Martin Buber, Franz Rosenzweig, and Ernst Bloch (all of them her friends). Her work is in particularly fitting company when read alongside Jewish religious-political and political thinkers such as Bertha Pappenheim, Hannah Arendt, Simone Weil, and Gertrud Stein. Initially a poet, Susman became a follower of the Jewish Renaissance movement, secular Messianism, and the German Revolution of 1918. This collection of essays shows how Susman's work speaks not only to her own time between the two World Wars but to the present day.

Margarete Susman (1872-1966) was a German-Jewish writer, poet, and critic. In 1933 she fled to Switzerland, where she published Das Buch Hiob und das Schicksal des jüdischen Volkes (1946), the first comprehensive religious interpretation of the Shoah.

Elisa Klapheck (1962) is Professor of Jewish Studies at the University of Paderborn, Germany, and author of Fräulein Rabbiner Jonas. The Story of the First Woman Rabbi (2004). She serves as a rabbi for the Jewish Community of Frankfurt.