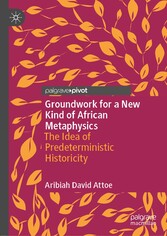 It is not far-fetched to say that much of what is termed 'African metaphysics' remains a traditional affair, without the sort of critical analysis that sheds away the burden of myths and ethnocentric rigidity. African ideas about the nature of being, God, causality, death, etc., have largely remained the same and unchallenged, mainly due to the hesitancy of some African scholars to question these suppositions or build beyond them. In this book, Aribiah David Attoe presents a unified African metaphysics that first interrogates important notions held by many traditional African thinkers, and then builds upon them to propose a largely materialistic account of African metaphysics. The book re-imagines and reconstructs the idea of God, being, causality and death in African metaphysics, tackling some of the problems associated with these concepts in African thought. It also opens up new vistas of thought, while engaging and encouraging African metaphysicians to explore a previously ignored perspective.


Aribiah David Attoe is currently a Lecturer at the University of Witwatersrand, South Africa; and a member of the Conversational Society of Philosophy, Calabar, Nigeria.