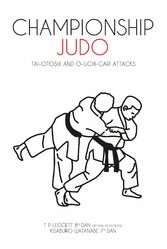 Written over sixty years ago, Trevor Leggett and Kisaburo Watanabe, drew on their great experience of Judo, both in Japan and the West, to offer a step by step guide to Taiotoshi and Ouchigari in great detail which will be invaluable for students to develop their Judo skills. As the authors say in their introduction, the aim is to introduce the reader to 'general attacking movement', the sub-title of this book, using these two techniques, with an approach that can be applied with some minor adaptation to most other throws.

Since this book first appeared in 1964 British Judo has gone from strength to strength and there have since been many books written on these techniques but it is firmly believed that this book, written by two such great names in Judo, still has much to offer students in the modern Judo world.

Trevor Pryce Leggett lived for a number of years in Japan where he learnt the Japanese language and studied Judo and Zen. He was the first foreigner to hold the sixth dan in Judo from the Kodokan in Japan. And he was 9th Dan from the BJA. A Senior Instructor at the Budokwai and founder of the Renshuden in London he was one of the leading teachers of Judo in the United Kingdom. He was the author of Kata Judo (with Dr Jigoro Kano) which was the authorised text of the British Judo Association. He was head of the Japanese Service of the BBC from 1946 to 1970 and was the author of books on Yoga and Zen including 'Zen and the Ways, 'Samurai Zen', 'The Spirit of Budo, and'The Complete Commentary by Sankara on the Yoga Sutras'. He died on 2nd August 2000 at the age of 85.

Kisaburo Watanabe was 7th Dan from the Kodokan. He was famous as a Judo stylist and for his attacking Judo. He captained his University team and the Japanese National team that defeated the USA in 1957. He was a gold medallist at the Asian Games in 1958 and a bronze medallist at the All Japan Championship in 1959. From 1962 to 1967 he was based in London where he was a senior instructor at the Budokwai and Renshuden and for three years was a National Judo Coach. In 1967 he returned to Japan to join the Nippon Budokan until his retirement in 2001. His last visit to London was in February 2018 to attend the Centenary of the Budokwai. He died on 25th September 2019 at the age of 83.