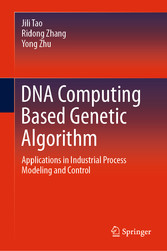 This book focuses on the implementation, evaluation and application of DNA/RNA-based genetic algorithms in connection with neural network modeling, fuzzy control, the Q-learning algorithm and CNN deep learning classifier. It presents several DNA/RNA-based genetic algorithms and their modifications, which are tested using benchmarks, as well as detailed information on the implementation steps and program code. In addition to single-objective optimization, here genetic algorithms are also used to solve multi-objective optimization for neural network modeling, fuzzy control, model predictive control and PID control. In closing, new topics such as Q-learning and CNN are introduced. The book offers a valuable reference guide for researchers and designers in system modeling and control, and for senior undergraduate and graduate students at colleges and universities.

Jili Tao received her B.Sc. and Ph.D. from Central South University and Zhejiang University, China, in 2004 and 2007, respectively. She is currently a Professor at the Institute of Ningbo Technology, Ningbo, China. Her research interests include intelligent optimization, modeling and its applications to electronic system design and control system design.


Ridong Zhang received his Ph.D. in Control Science and Engineering from Zhejiang University, Hangzhou, China, in 2007. From 2007 to 2015, he was a Full Professor with the Institute of Information and Control, Hangzhou Dianzi University, Hangzhou. Since 2015, he has been a Visiting Professor at the Chemical and Biomolecular Engineering Department, Hong Kong University of Science and Technology. His research interests include process modeling, model predictive control and nonlinear systems.


Yong Zhu, received M.Sc. degrees from HangZhou DianZi University, China, in  2004. He is currently a lecturer in the Institute of Ningbo technology, Ningbo, China. Meanwhile he has been a Ph.D. candidate in Ningbo University. His present research interests in electronic system design and advanced control system design.