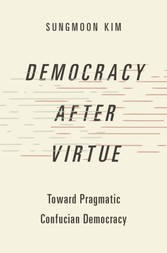 Is Confucianism compatible with democracy? Ongoing debates among political theorists revolve around the question of whether the overarching goal of Confucianism -- serving the people's moral and material well-being -- is attainable in modern day politics without broad democratic participation and without relying on a &quote,one person, one vote&quote, system. One side of the debate -- voiced by &quote,traditional&quote, Confucian meritocrats -- argues that only certain people are equipped with the moral character needed to lead and ensure broad public well-being. They emphasize moral virtue over civic virtue and the family over the state as the quintessential public institution. Moreover, they believe that a system of rule headed by meritorious elites can better handle complex modern public affairs than representative democracy. The other side -- voiced by Confucian democrats -- argues that unless all citizens participate equally in the public sphere, the kind of moral growth Confucianism emphasizes cannot be fully attained. Despite notable differences in political orientation, scholars of both positions acknowledge that democracy is largely of instrumental value for realizing Confucian moral ends in modern society. It would seem that Confucians of both types have largely dismissed democracy as a political system that can mediate clashing values and political views -- or even that Confucian democracy is a system marked by pluralism. In this book, Sungmoon Kim lays out a normative theory of Confucian democracy -- pragmatic Confucian democracy -- to address questions of the right to political participation, instrumental and intrinsic values of democracy, democratic procedure and substance, punishment and criminal justice, social and economic justice, and humanitarian intervention. As such, this project is not only relevant to the much debated topic of Confucian democracy as a cultural alternative to Western-style liberal democracy in East Asia, but it further investigates the philosophical implications of the idea and institution of Confucian democracy in normative democratic theory, criminal justice, distributive justice, and just war. Ultimately, Kim shows us that the question is not so much about the compatibility of Confucianism and democracy, but of how the two systems can benefit from each other.