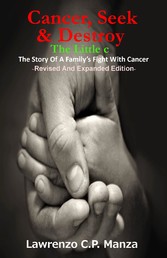 Cancer, Seek & Destroy - The Little c, The Story Of A Family's Fight With Cancer

Cancer, Seek & Destroy - The Little c, The Story Of A Family's Fight With Cancer

Charlie wakes up every morning with a fresh burst of energy. He’s always excited to start a brand new day with a positive attitude.

He loves clichés, and when he watches old TV shows and commercials with his dad, he always finds a few to try out at school the next day.

out on the kids at school. They ask him to repeat them over, and over again, and always laugh at his corny jokes. He never gets tired of the constant attention he gets.

Each morning Charlie rides to school on a large, old, faded bus. The kids call it the yellow monster. In the early fall, the sun casts an eerie shadow on it that makes it look like a gigantic dragon when it stops in front of his house. If Charlie is running a little late, he always knows when the bus is coming, by the loud squeal of its old worn brakes.

He sits in the back of the school bus with his best friends, Tim and Mike. The dark green worn vinyl seats sometimes have loose cotton stuffing popping out of them. They’ll each grab a handful and stuff it into each other’s shirts, and laugh and joke all the way to school.

Charlie is smaller than his two friends but makes up for it with his nonstop energy. They sometimes call him the “Freight Train” because once he gets going almost nothing can stop him.

With his blond, thick, wavy hair, and his piercing blue eyes, it’s hard not to notice him when he is around other people.

Charlie has been fascinated with the military from a very young age. His Uncle Ryan used to tell him war stories and bring him books when he would come to visit them.

Sometimes he would bring a few of his military medals he received for fighting in Vietnam and would let Charlie wear them until he left to go back to his home in Vermont.

Army action video games opened up a completely new world of excitement and entertainment for Charlie. He’d cut the neighbor’s lawns on Saturdays to save up enough money to buy the newest games on sale at the game store.

Each year on Halloween Charlie would wear his commando uniform with all of the accessories. Camouflage pants, jacket, patrol cap, lace-up boots, and gloves. His neighbors and friends nicknamed him “Commando Charlie,” and it stuck to him like gum to the bottom of your shoe.

Charlie and his parents live in a large yellow two-story house, with white trim windows and a vast porch with flowering plants in hanging baskets that wrap around the whole home in beautiful Marin County California.

His dad’s name is Dan; he’s a tall sturdy-framed man. He works out at the gym every morning before he goes to his office.

Dan has short brown hair and a trimmed goatee. With his gentle touch and good disposition, he and Carrie make a perfect married couple.

Dan owns his own successful advertisement business, and one of his client’s designs video games and lets him take some of the games home to play before they’re released.

Charlie can’t tell any of his friends, but they always wonder why he has the upper hand on some of the new games they play.

Charlie’s mom was born in Connecticut. She designed their home to be a replica of the Victorian styled house she grew up in as a child before it burnt down.

She added an entertainment room with a state of the art 65 inch 4K Ultra HD TV Flat Screen, and a 7.1 Theater Sound System with dual 12-inch sub-woofers. The room would rumble and tumble on a good movie or video game night.

On a chilly, damp, foggy, September morning, Charlie slowly walks downstairs into the brightly lit kitchen. His eyes react to the light bouncing off the large white cabinets causing him to squint. Dressed in his pajamas and camouflage robe, he complains to his mom about his throat hurting.

She presses her palm to his forehead and notices he’s running a slight temperature and his gland on the left side of his neck looks and feels swollen. Charlie didn’t even react to how icy cold her hands felt.
“Are you getting a cold Charlie?”

“This feels different Mom. I feel clammy; you know sweaty. I want to go to school, but I’m still really drained like I didn’t get any sleep last night. I think I’ll skip breakfast and go up to my room and watch TV.”

“Okay but no video games young man, there are rules to be followed when you’re feeling sick and staying home from school.” Carrie had a strange feeling in the pit of her stomach. Maybe it was a mother’s intuition, but this sudden change in

Charlie’s health had her worried. Charlie climbs up the stairs to his bedroom, but when he reaches the top step, he’s out of breath. He drags himself back to his room and decides all he wants to do is sleep. He calls out for his cat Murphy while his cold feet search under the blankets and find her at the foot of the bed under the sheets fast asleep. Carrie worked for a prestigious architectural firm in San Francisco. She designed Victorian styled homes and won several awards throughout the San Francisco and Marin Counties of California.

When she was pregnant with Charlie, she decided to leave the company and start her own business designing houses from her home so she could raise him.

Carrie is a very attractive, tall, slender and physically fit woman in her mid-thirties. She has long, silky, chestnut hair and has a very down to earth energy about her. She married her childhood sweetheart Dan Carlson and has been in love with him from the very first day she met him.
She decides to call Dr. Sam Young’s office. He’s been Charlie’s doctor since birth. He is a very kind gentle caring man in his late forties with a touch of gray in his curly black hair that gives him a wise and distinguished look.

Carrie met him when she was designing his home a few years before Charlie was born and they became instant friends.

Since its Friday, she thought it would be a good idea to know what to do if his condition worsened over the weekend.

She called the office and explained to Deanna, the office manager, what her son’s symptoms were and that he’s running a slight temperature.

“It’s been a very busy morning Mrs. Carlson. It’s flu season, and the office is full of sick children. Please don’t worry, Dr. Young will get back to you sometime today.”

Dr. Young called back later in the day and told Carrie to keep checking his temperature. “Try and get him to eat small meals and drink plenty of fluids. He can take Tylenol to help with his fever and any pain or discomfort he may be having.”
Carrie asked him if it would be a good idea to bring Charlie in for an appointment on Monday to make sure he wasn’t catching the flu.
“If he isn’t feeling any better, I would bring him in to see me. I’ll put Nancy on the phone so that she can schedule you for a Monday appointment. In the meantime, if anything changes like a fever of 101 or higher, chills, night sweats, vomiting or diarrhea, please go to the hospital emergency room. He may be getting that awful flu that is going around, better to be safe than sorry.”
“Thank you Sam; I‘m also very concerned about the gland on the left side of his neck, it’s swollen and tender. He’s never had that before.”

“Deanna mentioned that to me, it’s very puzzling and not a symptom of the flu bug that’s going around. I’ll take a look at it on Monday.”

“I’ll let you know if anything else changes. Thank you for taking the time to call me back.”

“Anytime, you can call me at home if you need my help, I’m always available 24-7 for you, Dan and Charlie.”

Carrie hangs up the phone, sits at the kitchen table, and notices that Charlie’s oatmeal with sprinkled brown sugar and blueberries is still in his bowl getting cold.

She reaches for his untouched glass of fresh squeezed orange juice and starts to sip it slowly. Carrie calls her husband at work and brings him up to speed on the morning’s events.

“I should come with you and Charlie to the doctor’s appointment. I have no meetings until later that afternoon, and I want to let our son know we’re both there for him.”

“Are you sure honey?”

“Yes, I want to be more involved even if it’s just a cold or the flu.”

“You have always been involved with everything we do.”

“I have another call, talk to you soon.”

Carrie hangs up the cordless phone and has a look of confusion on her face. She knows if he wants to talk about something, he will when he’s ready to.

A few hours later, Charlie slowly makes his way downstairs and asks his mom if he can have something to help soothe his sore throat.

“What did you have in mind?” She asks with a concerned look on her face.

“How about some ice cream, I think that might help,” he said sluggishly. Charlie sits down at the breakfast table while his mom fills his favorite cereal bowl with chocolate chip, mint swirl ice cream. She watches him struggle to swallow the soft cold desert.

When Charlie couldn't eat anymore, he heads upstairs to his room to rest. Carrie walks into her office to work for the rest of the day on new plans for a house she’s designing.

She enters her office and remembers that she needs to wind the old cherry red oak grandfather clock her parents gave her as...