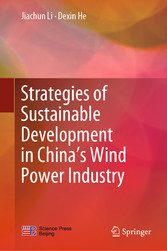 This book reviews the status quo and visions for the future in the wind energy industry in China and around the globe, focusing on its roles in optimizing energy structure, alleviating environmental pollution, and coping with climate change. Providing a blueprint of wind power development till 2050, it suggests a series of further measures in the context of policies, regulations, laws, and marketing in order to overcome the existing bottlenecks. Moreover, it proposes a number of potential innovative technologies related to IT+ and advanced manufacturing, including integrated & distributed power and micro-grid systems, multi-energy complement, green and intelligent manufacturing, reliability design, blade design, manufacturing and maintenance, drive drain systems, and offshore wind farms.
This book offers researchers and engineers insights into sustainable development in the wind power industry.

Jiachun Li graduated from Fudan University majoring aerodynamics. He is a Professor and a leading scientist of environment engineering at the Institute of Mechanics, CAS, since 1988. In addition to theoretical contributions, he solved several technical issues in ocean and wind power engineering. Totally, he has published more than 140 technical papers and 6 books. He received 4 awards of science or technology from MST or CAS. And he was awarded PY Zhou Prize in 2007. He is/was a member of IUTAM Assembly, Chairman of ACFM, President of CSTAM, Vice-President of CSOE, editor-in-chief of TAML, and editor-in-chief of an encyclopedia (volume: mechanics). He was elected as an academician of CAS in 2003.
He has co-authored the following books:
Zhuang FG, Li JC, Recent Advances in Fluid Mechanics, Springer, 2004
Zhuang FG, Li JC, New Trends in Fluid Mechanics Research, Springer, 2007
Li JC, Fu S, Progresses in Fluid Dynamics Research, AIP Publisher, 2011
Li JC, Fan J, Frontiers in Fluid Mechanics Research, Procedia Engineering, Vol. 102.
Dexin He graduated from Northwestern Polytechnical University majoring aerodynamics in 1961. He was the Research Professor of China Aerodynamics Research and Development Center. From 1978, he began his research in wind energy engineering and hosted or participated in many national science and technology research projects and wind energy development strategy research project. From 1981, he served as leader in the Chinese Renewable Energy Society (CRES), the Chinese Society of Theoretical and Applied Mechanics (CSTAM), World Wind Energy Association (WWEA), etc. He carried out the international wind energy technology cooperation and communication projects. He received a number of awards from the government. In 1996, he received the first prize from China Guanghua Science and Technology Foundation. In 2004, he received 'the World Wind Energy Award' from WWEA. As the chief editor or subeditor, he participated in writing 8 monographs. He has published more than 40 technical papers.