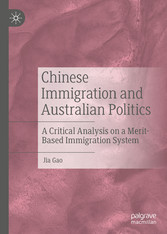 This book analyses how an increasing number of new Chinese migrants have integrated into Australian society and added a new dimension to Australian domestic politics as a result of Australia's merit-based immigration system and its shift towards Asia. These policies have helped Australia sustain its growth without a recession for decades, but have also slowly changed established patterns in the distribution of job opportunities, wealth, and political influence in the country. These transformations have recently triggered a strong Sinophobic campaign in Australia, the most disturbing aspect of which is the denial of the successful integration of Chinese migrants into Australian society. Based on evidence gathered through a longitudinal study of Chinese migrants in Australia, this book examines the misconceptions troubling Australia's current China debate from six important but overlooked perspectives, ranging from migration policy changes, economic factors, grassroots responses, the role of major political parties, community activism, to knowledge issues.

Jia Gao is Professor at the Asia Institute, the University of Melbourne. He has produced wide-ranging publications in both English and Chinese, including the following books: Chinese Activism of a Different Kind (2013), Chinese Migrant Entrepreneurship in Australia from the Early 1990s (2015), and Social Mobilisation in Post-Industrial China (2019).