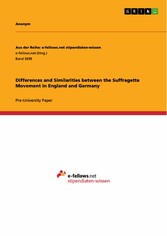 Differences and Similarities between the Suffragette Movement in England and Germany

Differences and Similarities between the Suffragette Movement in England and Germany

Pre-University Paper from the year 2019 in the subject Didactics - English - Applied Geography, grade: 1,0, , language: English, abstract: In comparison to other countries' fight for equal voting rights, a disproportional focus is often put on the radical English suffragette movement. This has raised questions about such a distribution of appreciation, especially as its German counterpart succeeded to establish women's suffrage a decade earlier. Hence, this paper examines these perceptions by comparing exemplary selected aspects of the suffragette movement in England and Germany in order to determine the extent of disparity between both countries. Simultaneously, it investigates why England is generally perceived as the leader in women's suffrage in comparison to Germany and evaluates if this difference of acknowledgement is justified.