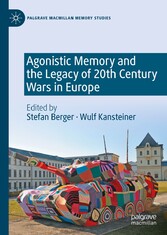 Agonistic Memory and the Legacy of 20th Century Wars in Europe

Agonistic Memory and the Legacy of 20th Century Wars in Europe

This book discusses the merits of the theory of agonistic memory in relation to the memory of war. After explaining the theory in detail it provides two case studies, one on war museums in contemporary Europe and one on mass graves exhumations, which both focus on analyzing to what extent these memory sites produce different regimes of memory. Furthermore, the book provides insights into the making of an agonistic exhibition at the Ruhr Museum in Essen, Germany. It also analyses audience reaction to a theatre play scripted and performed by the Spanish theatre company Micomicion that was supposed to put agonism on stage. There is also an analysis of a Massive Open Online Course (MOOC) designed and delivered on the theory of agonistic memory and its impact on the memory of war. Finally, the book provides a personal review of the history, problems and accomplishments of the theory of agonistic memory by the two editors of the volume.


Stefan Berger is Professor of Social History and Director of the Institute for Social Movements at Ruhr-Universitaet Bochum, Germany. He is also executive chair of the Foundation History of the Ruhr and Honorary Professor at Cardiff University, UK. He has published widely on the history of memory, the history of deindustrialization, industrial heritage, the history of social movements and labour movements, the history of historiography, historical theory and the history of nationalism and national identity.
Wulf Kansteiner is Professor of Memory Studies and Historical Theory at Aarhus University, Denmark. His research interests include the methods and theories of memory studies; the role of visual media-TV, film, digital culture-in the formation of cultural memory; post-narrativist historical theory; and Holocaust history, memory, and historiography. His recent publications include 'Prime Time Nationalism: Patterns of Prejudice in TV Crime Fiction' in National Stereotyping, Identity, Politics, European Crises (2021) and 'Media and Technology,' in The Twentieth Century, vol. 6 of A Cultural History of Memory (2020).